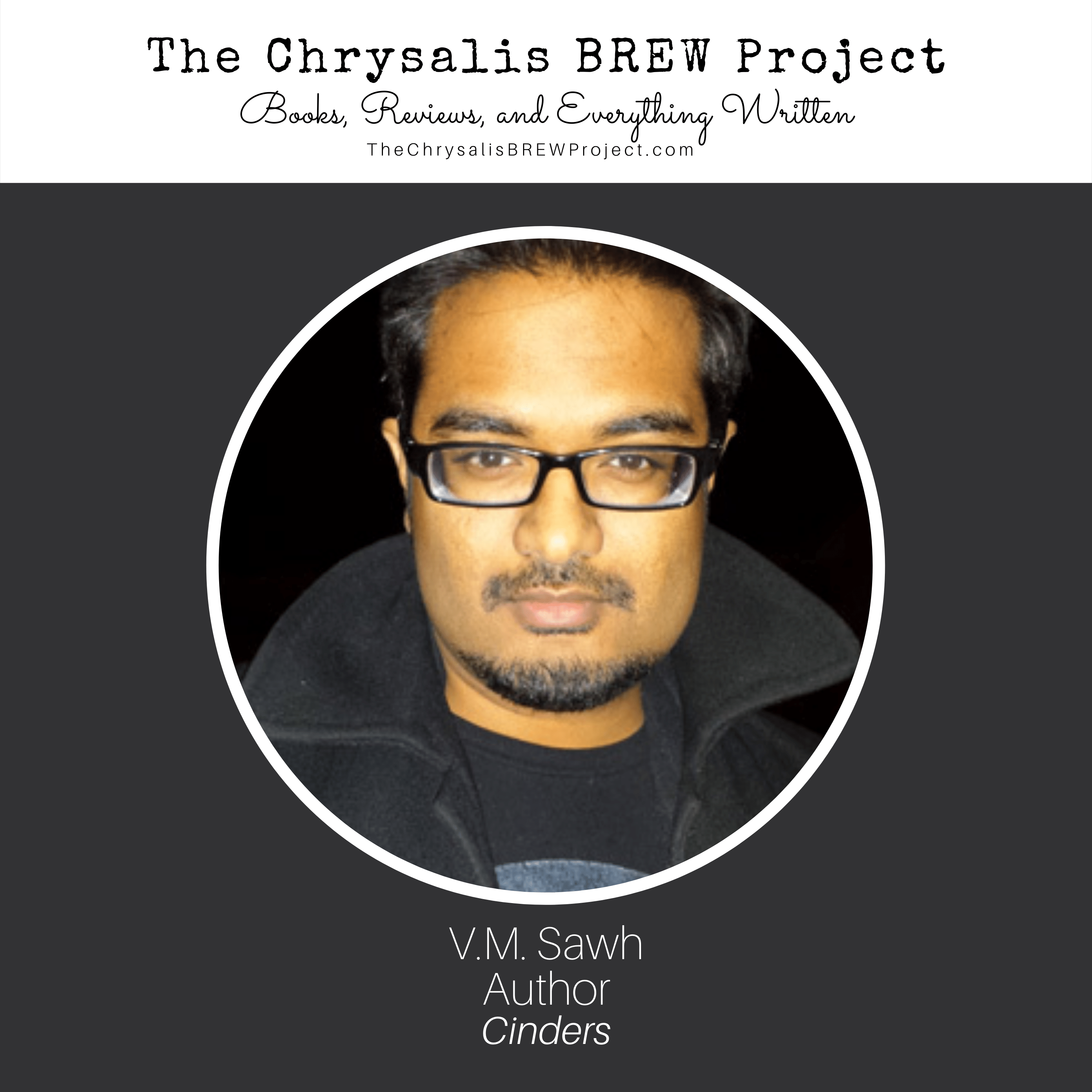 V.M. Sawh is a survivor. When a serious car accident robbed him of the ability to read or write, V.M. Sawh thought that his dream of being an author was over. However, his experience as an immigrant coming from the humid jungles of South America to the wintry Canadian shores, taught him the values of adaptation and perseverance. His journey of recovery has been aided by his best friend turned wife, and three cat-nurses.

With three novels completed and seeking representation, V.M. Sawh returns to his series of short-fiction fairy tales called Good Tales for Bad Dreams and invites you to take a walk on the dark side of make-believe.

Author’s Response: Yes. Reading started early on for me as a way to explore other worlds and new ways of thinking. Why be a schoolboy when you can be an astronaut fighting Space T-Rexes?

Author’s Response: Probably around age 5, as far as I can remember. I grew up on Hardy Boys and Nancy Drew mysteries and adventure stories for boys imported from England. My real fascination came from comic books and genre fiction, the latter of which I picked up way too early, which probably warped me into becoming someone less than wholesome.

Author’s Response: I’m going back to my original favourite that changed my life. Alan Moore’s “The Anatomy Lesson”. This was his debut issue where he took over the Swamp Thing mythos and transformed the corpse of a plant man into the resurrected plant who thought he was a man. It was brilliant then and it’s still brilliant now. It certainly made me side-eye the rose bushes.

Author’s Response: I wrote my first stories around the age of 6 in my schoolbooks, instead of doing math. Because I hate math. I still have them. They’re silly little things inspired by dusty old movie posters I saw in the video store.

Author’s Response: My greatest obstacle was really a lack of belief in myself. Cinders was originally written for submission in a compilation of short stories about fairy tales. I wrote it as an exercise to take a break from my novel. It had to fit certain criteria and be 10k words or less. I came up with the idea while driving at night and finished it in 30 days. However, the struggle came with trying to make it fit within the compilation’s guidelines. I kept dulling down the story to the point where it had gone from a knife to a beach ball. Despite this, the story was considered before being rejected. I hung my head. Then met Guillermo del Toro (my hero). Then decided to publish my original version on my own and holy-sweet-crap did it take off.

Author’s Response: Trust your readers to tell you what’s wrong with your story. Trust yourself to fix it.

Author’s Response: Alan Moore, Grant Morrison, Stephen King, Dean R. Koontz, Robert McCammon, H.P. Lovecraft, Kelly Thompson. I’m inspired by every book I read, whether good or bad. The former shows me how it’s done, whereas the latter annoys me into trying to come up with my own version to do it better.

Author’s Response: I plan on shocking and delighting readers for as long as I possibly can. Readers can expect to see “The Hunted Rose” – the Good Tales For Bad Dreams version of Red Riding Hood before the end of 2022.

As for my 3-piece main course… that horror trilogy is sure to flip some wigs and cause some heart palpitations, so I’m currently seeking representation. When the right agent’s eyes light up… world look out.

Know more about our author via the following links: