The Magic within the Pages 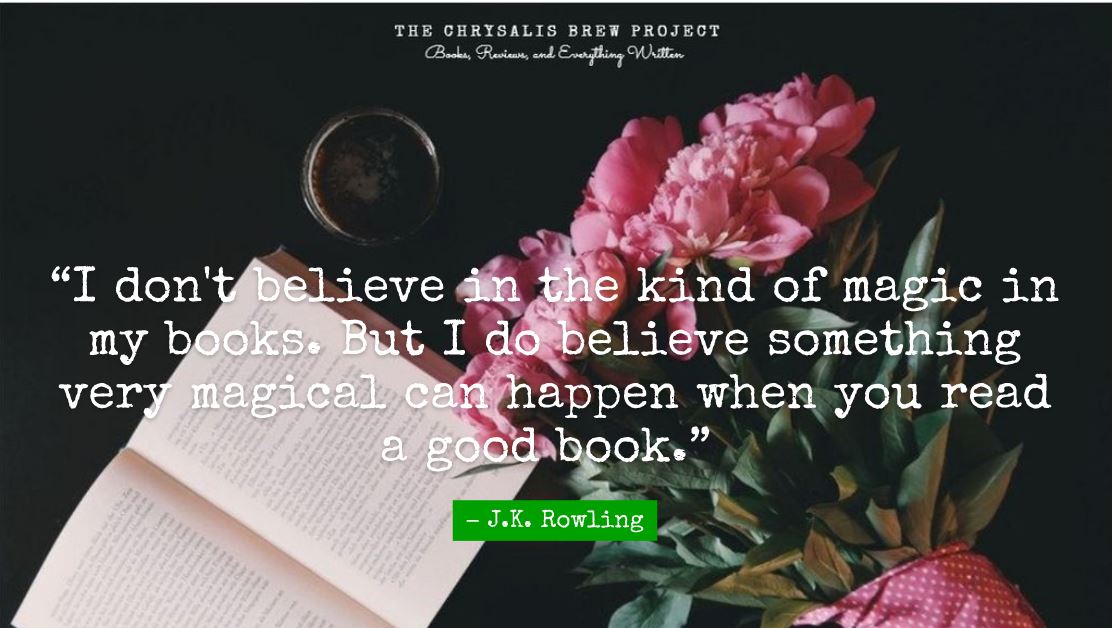 I don’t believe in the kind of magic in my books. But I do believe something very magical can happen when you read a good book.

I’ve said a lot about the quote quite too many times, as you could read from one of my posts. Yet, here I am, still inclined to write more.

So what else do I have to convey? Don’t worry if you don’t have a wand or a potion yet. You won’t even be needing a magical scroll to locate these treasured finds.

Here are my blast from the past notes on our beloved Rowling’s famously-magical works.

Book 1: Harry Potter and the Sorcerer’s Stone by J.K. Rowling


What if your parents died for you to live? Orphaned, you had to grow up with your aunt, her husband, and your cousin who all thought nothing better of you. How would you feel? Is there hope for you?

That one night when Hagrid paid Harry a visit proved there could really be plus more. It was the start of a long line of discoveries and the beginning of an extraordinary adventure.

I loved the movie version, but reading through the piece’s pages had been an altogether different experience with heaps of details not captured on-screen as to be expected. From this first book in the series, I knew I was already hooked and bound to surely read the next instalments. Rowling has really concocted up a landmark creation that touched and caught the heart and imagination of the young and young-at-heart ones alike. That’s a figurative muggle magical touch working at its finest, indeed.

Book 2: Harry Potter and the Chamber of Secrets by J.K. Rowling

Harry no longer stayed in the room below the stairs. He was given permission to stay at Dudley’s second room on the upper floor, something that his uncle stressed he should be really grateful for. One thing that he was so concerned about had been the absence of letters from his friends. Did they forget about him? He had been quite excited to start his second Hogwarts year, and he really vowed to be in his best behaviour so that his uncle and aunt would allow him to. With such strong resolve, everything should have already been fine. However, Dobby got in the way. What would Harry do? Would he still be able to make it to his magic classes that year?

Discrimination, prejudice, and bias had been at their peak in this book. Would you give muggle-borns a chance? Would you trust a professor just because of his pretty face or fame? Who was a friend and who was not?

This piece had really been worth my while still, regardless of the answers to these questions and countless others.

Book 3 had become much awaited, as expected.

Book 3: Harry Potter and the Prisoner of Azkaban by J.K. Rowling

The wizarding world’s worst infamous prisoner had escaped the most tightly guarded prison of Azkaban. What could be worse than that? With his parents murdered by a dark wizard and his adoptive family not really treating him well, having a godfather should be a blessing. Right? Yet, what would you say if the fugitive and your godfather was one and the same person?

Not everything was really what initially met the eye in this book’s theme.

Book 4: Harry Potter and the Goblet of Fire by J.K. Rowling

I’ve read this book more than 18 years ago, so I won’t be able to pinpoint all the details. We’ve just watched the movie version of this piece last night, and my youngest son just couldn’t help but complain about how different the movie is from what’s really written. I couldn’t blame him, but our movie session still went through for the gazillionth time.

The Triwizard Tournament, Professor Moody, Rita Skitter, the Minister of Magic himself, and all graced this piece. Love angles and friend squabbles also added twists and turns. The ending had been heartbreaking, and yet the story continues on so there was still hope. I really looked forward to Book 5 thereafter.

Book 5: Harry Potter and the Order of the Phoenix by J.K. Rowling

What was the Order of the Phoenix? How was it related to Dumbledore’s Army? Did Dumbledore really have an army? It’s the battle of good versus evil in this Potter book. I know that we all want the same ending for this one.

Book 6: Harry Potter and the Half-Blood Prince by J.K. Rowling

Who is the half-blood prince? I didn’t expect him to be.

Book 7: Harry Potter and the Deathly Hallows by J.K. Rowling

This is a fitting finale to the series. To say that would seem to be an understatement, though.

One would only wish that there’d be more to follow. Well, wishes can come true, indeed, as a number of us would have already known. The form and medium used thereafter turned out different, and yet there’s more to appreciate from our beloved author than to complain about.

Even with all my rambling about the series, the truth is that I am just one of millions of Potter fans who just can’t get enough of our beloved character and the rest of the army. One thing is for sure, too – good should always prevail. The Dementors may have had their time, but let’s ensure that our proverbial Patronus work better in a figurative sense in our reality.

How about you? What can you say about the series? I’d love to know your thoughts.

Do you know what’s even more interesting?

All 7 books in the Harry Potter series are available to be read free through your Kindle Unlimited subscription!

For the benefit those who haven’t found out this great promotional offer yet, let it be known that we also could avail of one month worth of free Kindle Unlimited trial, too!

I tried mine, and it gave me an enormous smorgasbord of extremely popular bestsellers as well as new quality books from amazing authors.

Hurry! Check out your country’s Amazon website for more details.

Note: The reviews that appear on this post are non-commercial.