Sparkles in the Dark

ByMum of the Word 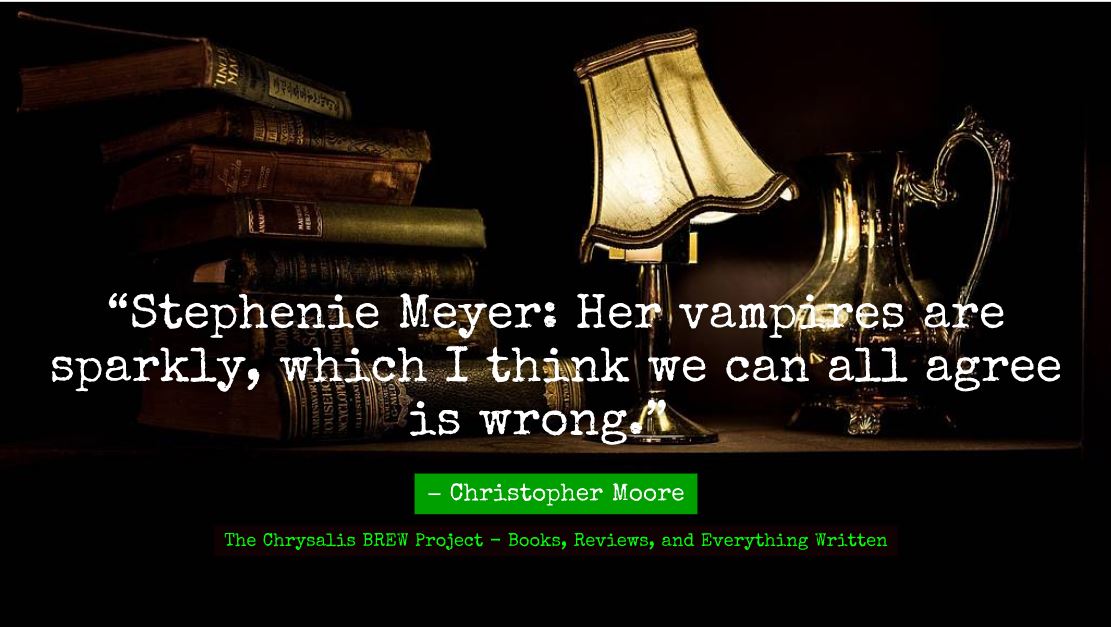 “Stephenie Meyer: Her vampires are sparkly, which I think we can all agree is wrong.”

Who will disagree with Christopher Moore’s take on her work? Would you prefer her vampires to be what they are now?

As for me, here are my considerations:

First, let’s take a look at what we’re discussing.

Still, the main books’ popularity far outweighs and compensates for the least familiar newbies in the collection. Thus, it’s a “yes” from me in this aspect.

A stay-at-home mum prior to becoming famous, Stephenie Meyer had no formal or informal writing experience when she started penning her series. At one point in time, she even aspired to become a lawyer because she did not believe she’d become successful as a writer.

Well, history proved her wrong and did her right. Meyer became America’s best-selling author in 2008 and 2009. Among the many accolades that attest to Meyer’s writing prowess are the following: British Book Award -Children’s Book of the Year 2008 for “Breaking Dawn” and 2009 Kids’ Choice Award – Favorite Book for the entire series.

If she made it to the top with her vampires as they are, then it’s another “yes” based on this parameter.

I am not a fan of thrillers or horror flicks. Yet Meyer’s books-turned-movies made the genre more tolerable. I believe it’ll be terribly hard for me to take in the scenes if Bella’s Edward isn’t as glittery-glamorous as he has been portrayed along with the others. Again, if a non-fan of the genre can appreciate the books and the movies, then this means it’s a “yes” from me here.

It’s not what conforms that’s always perfect. At times, if not most of the time, it’s the courage to think outside the box or even without the box that could make us soar.

Thus, going back to our original questions, what is my answer?

YES. I disagree with Christopher Moore.

YES. I prefer Meyer’s Edward and all as they are.

How about you? What do you think? Do you agree with this quote? I’m looking forward to knowing your thoughts.

By Mum of the Word

I love everything about the written word and my family, and all. I believe.