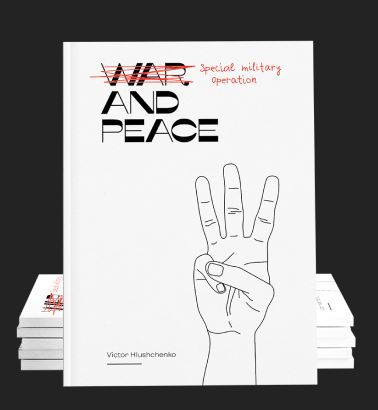 22.09.2022, Kyiv, Ukraine – The book was written by an eyewitness of the Russian invasion of Ukraine. He has been remaining in Kyiv from the very first day of the war until now.

The author tells his story of events from the perspective of Kyiv’s citizen, whose cosmopolitan life has been interrupted in one abrupt moment. This is a novel that describes events and impressions of a real person, not just a summary of news.

Wittily and funny written book about difficult and uneasy matters. Expect as much of a smirk, as of tears and sitting on the edge of your chair. A reader will learn about contemporary Ukrainians and their peculiarities. And will love them!

Incidentally, buying a book is a great way to help Ukraine: 20% of book sales are deducted to support the With Ukraine fund.

Victor Hlushchenko was born in Kyiv, Ukraine, 1983. He was writing this book right now, during the war in his native city. Author’s family moved to India in 1987-89, because his father got a contract at Calicut University as a teacher of Russian language and literature. His mother is a teacher of history, brother is a screenwriter and his grandpa is a poet (20+ books).

He graduated from the Institute of International Relations, Law faculty in 2006. Never worked as a lawyer though.

Started his professional career in an advertising agency, had experience in a cinema business, NGO, largest Ukrainian bank and a sporting goods distributor. From 2018 till now — CEO of Smartass, a network of Ukrainian fitness clubs.

As a writer he’s been training his skills as a columnist in Ukrainian fashion magazines, and as a spectator of his own life on Facebook and Instagram. Probably this e-book would never have happened if not for the Russian invasion of Ukraine in 2022.

Before 24.02.22 he enjoyed traveling around the world, drinking wine and doing sports. He was planning to marry and overall had the time of his life.

After 24.02.22 he’s a newborn writer, extremely good-under-air-sirens football player and a proud owner of a crazy weimaraner dog named Hop.

Furthermore, Victor is currently looking for the British or American publishing houses to issue a paper version of the book and is open to cooperation.

A few parts of the book

The main idea was to collect money and buy food, medicines, and everything necessary to help the inhabitants of Kyiv. Getting all these things somewhere free of charge was also welcome. As previously mentioned, many people needed help these days – people in bomb shelters, the elderly who refused to leave their apartments, and people who were just so stressed by this situation that they could not function properly.

Don’t get me wrong, I have great respect for Switzerland, and I envy it in the best way. I love to go snowboarding in the mountains there, I love Swiss chocolate and cheese and I believe there is nothing in the world more reliable than their banks and watches. I just wanted to give an example of a country where, in my opinion, everything is calm and stable. Please don’t cancel my visa!

Our sweet conversation drained in the blink of an eye. We raised up and, as quiet as possible, moved towards the sound. Just in case I took what was the nearest – the unfinished bottle of wine. Iryna took the ice crusher, which, thank God, she noticed on the bar table. I wish I could tell you that these were the instruments to help us to cool our drinks…